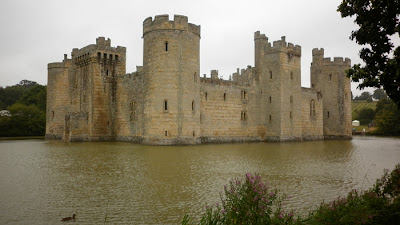 Another trip out we had during our holidays was a visit to Bodiam Castle just over the border into East Sussex.

Bodiam Castle was begun in 1386 by Sir Edward Dalyngrugge who was granted a licence to crenellate his mansion at Bodiam. Instead of just improving the current building, Dalyngrugge took the opportunity to build a completely new castle from scratch on a new site near by. Dalyngrugge won his spurs fighting in France with Sir Robert Knowles and amassed a large amount of wealth along the way. When Sussex came under threat from attack by the French, king Richard II was willing to allow the local lords in the area to fortify their homes and help defend the country. Bodiam was built in the valley of the Rother, a river which at the time could have been used by large ships to travel inland.

It was built at an evolutionary stage when the nobility were looking for more comfortable, agreeable places to live that offered them security, but also represented an outward show of their wealth and rank.

Even in its decay and ruin it is one of the most beautiful castles in England and the very epitome of a medieval castle – it looks like the work of a giant bucket and spade. 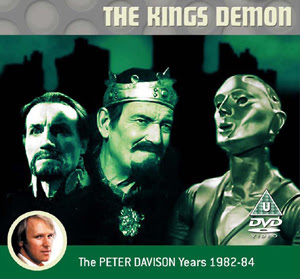 The impressive towers and broad moat of Bodiam Castle are like a scene from a fantasy as you gaze at them for the very first time – so it is not surprising that the castle was chosen as the location for the Doctor Who story ‘The Kings Demon’.
The Doctor and his companions arrive at a medieval joust and are surprised to be greeted warmly by King John, who calls them his demons. But when a young nobleman returns, having just left King John in London, the Doctor realizes that this king must be an impostor! Then the Master makes an appearance and the Doctor’s worst fears are confirmed…