Time travel – if you can keep it straight in your head, when all about you

are losing theirs and blaming it on you; you’ll be a timelord, my son 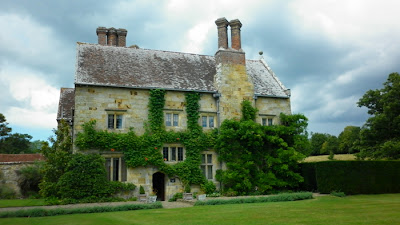 The cottage has been fully booked most of this Summer, but luckily we did book ourselves a week !

Over the next week, I will post details of some of the places we visited.

A really good day out can be had at Bateman’s, the home of the writer Rudyard Kipling.

He wrote in Something of Myself about his first impressions of the house:

..it was the heartbreaking Locomobile that brought us to the house called ‘Bateman’s’, we had seen an advertisement of her, and we reached her down an enlarged rabbit-hole of a lane. At very first sight the Committee of Ways and Means [Mrs Kipling and himself] said ‘That’s her! The only She! Make an honest woman of her – quick!’. We entered and felt her Spirit – her Feng Shui – to be good. We went through every room and found no shadow of ancient regrets, stifled miseries, nor any menace though the ‘new’ end of her was three hundred years old…

Rudyard Kipling settled in the house in 1902, and lived there for over 30 years, until his death, rejoicing in its seclusion under the Sussex Downs, and in the evidence all around of thousands of years of English History.

The first decade of his new life there saw the creation of Traffics and Discoveries (1904), Puck of Pook’s Hill (1906) – the hill can be seen from the lawn at Bateman’s, to the south-west – and Rewards and Fairies (1910).

The Jacobean house is built of sandstone quarried from a local site and the tiles are all baked from Wealden clay. The delightful house is set in 33 acres of pretty grounds bordered by the River Dudwell with its watermill erected in 1750, which has been restored and is still used for grinding flour.

The interior of the house reflects Kipling’s strong links with the Indian subcontinent including many oriental rugs and Indian works of art and artifacts. Exhibitions contain manuscripts, letters and mementos of Kipling’s life and work. The heart of the house is the book lined study at the top of the stairs where the writer worked seated at the 17th century walnut refectory table.

Kipling was a pioneer motorist and owned several Lancasters and Rolls Royces, including his Phantom I built in 1928 which is on display. The cartoonist who drew this cartoon for Punch actually based it on one of Kipling’s cars. 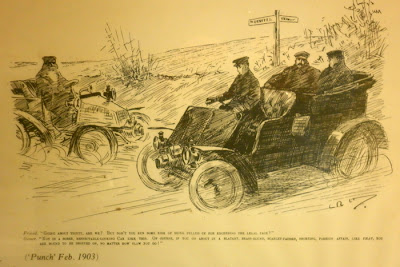 The house is now held by the National Trust as a memorial to Rudyard Kipling, and can be visited between April and October.

As always, a link can be found to the world of Doctor Who: 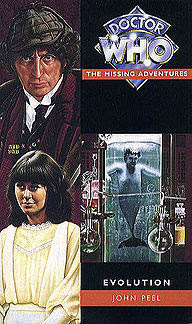 Evolution is an original novel written by John Peel. Sarah Jane really wants to meet the journalist Rudyard Kipling, so the Doctor sets the co-ordinates in the TARDIS. Not materialising in quite the right place, the are pursued across the Devon Moorland by a massive feral hound.

Meanwhile something strange is going on, children going missing, strange lights in the waters of the bay, fishermen being found mutilated and graves robbed of their corpses.

A young Rudyard Kipling sets up search parties for the missing children while a ships doctor by the name of Arthur Conan Doyle is determined to investigate.

The Doctor and Doyle join forces to uncover a macabre scheme to interfere with human evolution – and both Sarah Jane and Kipling face a terrifying transmogrification.

If you enjoyed the Philip Hinchcliffe / Robert Holmes era of the series, you’ll enjoy this book. It is out of print now but you should be able to find a second-hand copy on Amazon.