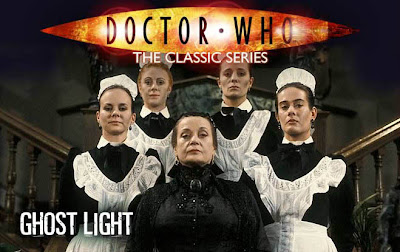 In the story Ghostlight The Doctor takes Ace to an old ‘haunted’ house called Gabriel Chase in the year 1883. 100 years before events that took place within that very house in her personal past.

The writer, Marc Platt, includes several allusions and references to late 19th and early 20th century literature. Among the most notable, Mrs Grose is named after the housekeeper in Henry James‘ short story The Turn of the Screw (1898).

Lamb House was built in 1723 by James Lamb and the same year he was chosen mayor for the first time. In 1726 George I, returning from Hanover to open parliament, was driven ashore by a terrible storm and landed at Camber Sands. James Lamb escorted the king to his house where the family entertained him for three days.  On the first night Mrs Lamb, who had to give up the best bedroom to the king, gave birth to a baby boy. The king acted as godfather at the christening of the Lamb’s son who was given the name George.

Henry James loved his home in Rye which was visited by many other famous writers and artists. He became a British subject in 1915 and was awarded the OM in 1916. James suffered a stroke on December 2, 1915. He died in Rye on February 28, 1916.

Lamb House is administered and maintained on the Trust’s behalf by its current tenant and is open on Saturdays and Thursdays from March to October – 2.00-6.00.
See Lamb House website for details

Some of James’s personal possessions can be seen and there is a walled garden.

Lamb House is the subject of Joan Aiken‘s novel The Haunting of Lamb House which is composed of three novellas about residents of the house at different times, including James himself.