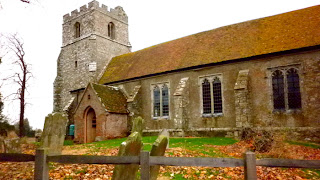 St Dunstan’s was built at the end of the twelfth century and from 1817 to 1821 the Rector of Snargate was Richard Harris Barham, best known as Thomas Ingoldsby, Esq., eponymous author of The Ingoldsby Legends.

On the north wall is a wall painting of a ship of about the year 1500.  It was discovered under a layer of whitewash.  A local tradition maintains that the painting of a ship on the north wall opposite the main door of a marsh church meant that the church was a safe place to hide smuggled goods and it was frequently used for storing contraband (Braham claimed he could find it on a dark night from the smell of tobacco).

Snargate’s most surprising claim to fame in the late 19th century, is that it was home to an important artist. Harold Gilman, sometimes called the English Van Gogh, was a British Impressionist and a member of the Camden Town Group. He grew up at Snargate Rectory, where his father was Rector.
Snargate takes its name from the “snare-gate”, or sluice-gate, which was put up here to control the waterway from Appledore to Romney. The gate can still be seen between the church and “The Red Lion” pub.

I will write more about “The Red Lion”, in another occasional series I will doing on the pubs of the Marsh. 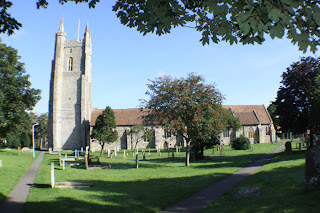 Just across from the cottage, off Coronation square, is the church of All Saints.

It was built in the thirteenth century when Lydd was at the height of its prosperity.

It is the longest church in Kent – at 199ft it is of cathedral sized proportions and is therefore distinguished as the “Cathedral of the Marsh”.

In the north-west corner, the remains of a small fourth or fifth century Romano British or Saxon basilica has been taken into the thirteenth century church, which establishes Lydd’s existence as before 740 AD and makes this the oldest masonry on the Marsh.

In the north-east chapel there is a fourteenth century tomb with the sculpted figure of a recumbent knight.

In 1940 the chancel of the church was destroyed by a direct hit from a bomb; the attack occurred at 4:07 PM on the 15th of October, which is when the church clock stopped. Additional bombing attacks in 1944 caused further damage, and painstaking repairs were made using the original bricks. Thus the masonry at Lydd spans a period of over 1500 years.

The church’s impressive graveyard features the final resting places of Lt. Thomas Edgar, who was Captain Cook’s companion on his round-the-world voyage, and Samuel Finn, who commanded the battery at Dungeness in the early 19th century. Many smugglers’ graves can be found here as well.

On Sunday mornings visitors to the cottage will be awaken by the Call to worship chimes from the bell tower – constructed by Thomas Stanley, a senior mason at Canterbury Cathedral, between 1442 and 1446.

You can also enjoy the bells on one evening of the week when the bellringers practice. 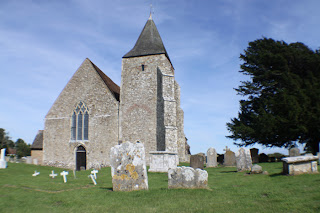 There are a number of historic churches dotted around the Marsh, so I thought it would be a good idea to do an occasional series of posts giving some details on them – in case you choose to visit them whilst staying at the cottage.

The obvious place to start, as the cottage is in Lydd, would be All Saints in Lydd itself. ‘The Cathedral of the Marsh’ as it is known. I’ll leave that to a later date, however, because you will see St Clement as you drive to the cottage, on the Lydd Road.

I drove passed it countless times as I was renovating the cottage and it always cheered me to know that the long drive was nearly over! I finally managed to pop in to have a look, in August.

It is thought that the church dates back to the eleventh century, as dedications to St Clement relate to when the dane, Canute, was King of England.

Although now well inland, back then, Old Romney was a port – which is significant because St.Clement was martyred by tying his neck to an anchor and casting him into the Black Sea.

In 1250 and in following years, a series of violent storms broke through the coastal shingle banks, flooding significant areas and returning much of the area to marsh, and destroying the harbour.

The present church dates from the mid twelfth century and had various additions up to the late thirteenth century.

There are a number of unusual features. Three seventeenth century commandment boards are still in their original place behind the altar. I found it quite amusing to think about the priority different sins seemed to have!

The other unusual feature is the box pews painted pink! Restoration in the early 1960s was financed by the Disney company who filmed “Dr. Syn” (vicar by day, smuggler by night) here, and the parishioners liked the colour so much they decided to keep it!

The film maker Derek Jarman is buried in the churchyard and is commemorated by a headstone simply bearing his signature.

I will post more in future on the story of Doctor Syn and Derek Jarman’s garden at Dungeness.